This chart from 2007 shows the trajectory of the web future moving in a straight line from where we are now (or were in 2007) to the future of web 4.0 and beyond. But I don’t think that the future of the web will such a simple story. 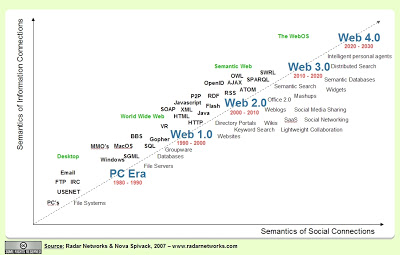 Innovation always comes unexpectedly and from the periphery. What we know will be changed by the next wave of innovation just as our world was changed by web 2.0 and its associated new business models.

What is termed web 3.0 is pretty much here already and is merely being tweaked. But it is the next generation of web that is up for grabs. I’m watching out for the next disruptor. It might not even be a cutting edge technology. Instead it might be an existing technology used in a new way or in a new context. Remember that mobile phone text messaging was old technology that resonated in a new way with younger mobile phone users and generated an entirely new business model.

None of us know what the next generation of the web holds. But we do know that work being done now in artificial intelligence, new interfaces (like Microsoft Surface), wearable computing and semantic computing are all possibilities.

One thing is certain, the next big thing will surprise us in one way or another. Once it is here it will seem obvious, but as usual it isn’t obvious until it gets here. That is the way of the future.

Kate Carruthers is Chief Data & Insights Officer for UNSW Sydney, and is also an Adjunct Senior Lecturer in the School of Computer Science & Engineering. She is certified in information security and is currently undertaking postgraduate studies terrorism and security. Kate has extensive experience in senior roles in ICT, marketing, data and digital; and is a member of the NSW Government’s Data Analytics Centre Advisory Board. Kate is currently working at the intersection of data analytics, AI, ML, privacy, cyber security, and data protection. View all posts by Kate Carruthers