In the past we used to be able to separate the public from the private and business from the personal quite easily. But this was an aberration.

Privacy was a tiny blip in the long history of human existence. Going back only as far as our great grandparent’s generation privacy was relatively rare. And in the generations before that privacy was considered almost absurd, even for the very rich. 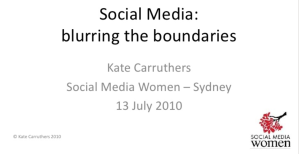 Most people lived in small cramped houses and shared their space with many others. In those days even conjugal relations were not private for most people.

Most people lived in villages too, where just about everyone knew each other’s business. But for a very short period, during the mid to late twentieth century, privacy was possible in the western world due to a new standard of housing.

It was the post World War 2 housing – where each nuclear family had its own house – that made privacy possible. Finally Mum and Dad had personal space and sometimes even the kids had their own rooms. For a brief period in the twentieth century privacy became the norm.

But with the Digital Revolution in the early twenty first century we have made a return to the village. And this time the village is virtual.

This digital village means that the boundaries between public and private, business and personal are becoming increasingly blurred. I’ve taken to drawing them as a Venn diagram.

As we adopt the various social computing platforms in our personal lives – such as Facebook, Digg, Slideshare, YouTube, or Twitter – we blur the boundaries between public and private by our own making. Then, as companies and other organisations adopt the same technologies for business purposes and ask us to drive them, we begin the blur the boundaries between business and personal.

As a result we are turning into:

“ambient broadcasters who disclose a great deal of personal information in order to stay connected and take advantage of social, economic, and political opportunities.”

And, by means of this broadcasting of our information, we are paying the social media platform providers through our data. These providers are not making their platforms available to us for free. They are doing it because our data is the goldmine of the twenty first century. We are paying them by giving away data about our lives, which are increasingly exposed online in the virtual village. 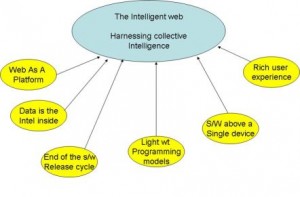 This view of data as critical to the new internet (often called Web 2.0) was explained by Tim O’Reilly back in 2005 and is summarised nicely in this diagram by Ajit Jaokar.

And this new interactive and easier to use web is compelling to many of us. It enables us to do many things including:

But let’s put all of this aside for a moment to consider human nature. And to start let’s consider an old saying:

“What has been will be again, what has been done will be done again; there is nothing new under the sun. ”
Source: Ecclesiastes 1:9-14

Thus one thing we need to keep in mind about this digital village we’re living in now is that no human behaviour happens online that does not already happen offline. What is different, however, is the the amplification effects of the web and the way that the medium facilitates amplified responses.

We’ve all seen the poor secretary somewhere who writes an email only have it go global almost overnight and then lose their job. That’s the amplification effect of the web. In the past that conversation might have got out to a small group of people via word of mouth. But now it truly can go global in a matter of hours.

And, while this digital village gives rise to an enormous number of benefits and opportunities, it also gives rise to some risks.

The three key risks I see are:

This leads into the question of how we can mitigate these risks.

The main thing is to:

The human race has survived the advent of many revolutionary technologies – including the printing press, the telegraph, telephone, radio and television. Each was predicted to cause disaster to our kind and, miraculously, we appear to have survived. But, rather than the doom predicted, each of these technologies has opened up remarkable vistas of opportunity, wealth and social good for humankind.

Note: This post is based on a presentation at Social Media Women on 13 July 2010. The slides are up on Slideshare.