The future of work has been an emerging issue for a long time, and now as automation disrupts traditional employment, it is safe to say that it has emerged. It is becoming increasingly urgent to find a solution for those displaced. We need new ideas and approaches to this problem. Otherwise we will see a large number of people out of the workforce for long periods, with a concomitant growth in populist politics and the destruction of the social compact.

A good example of the issue is a recent article on NPR that shows the most common job in every US state in 2014. With the prevalence of the job of ‘truck driver’ across the country there is going to be some real pain felt when autonomous trucks hit the road in the near future. Already the so-called rust belt in the US is suffering from underemployment, and it’s about to get much worse. It’s pretty clear that all these truck drivers are unlikely to become coders, so what shall we do? 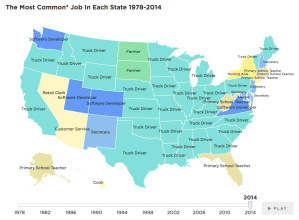 We are seeing the fight by employers to reduce wages bills means that they are adopting automation wherever it is feasible, for example: Thanks To ‘Fight For $15’ Minimum Wage, McDonald’s Unveils Job-Replacing Self-Service Kiosks Nationwide.

More entrepreneurial, approaches are appearing, but they are on a small scale. Ideas like Phil Morle’s #nextmonday initiative, where he hosted a two day workshop where former Ford employees learned how to go about turning an idea into a new business. And initiatives like code clubs for kids seek to add new digital skills to student’s portfolios.

The gig economy is growing as old-fashioned jobs with benefits are killed off by cost saving initiatives. Even in New South Wales we  see local government jobs are being taken by cheaper foreign workers.

This growth in job uncertainty will see changes in society that we remain unprepared for. It changes the nature of the social compact with which we are all familiar. In the recent past one obtained a permanent job, borrowed money to buy a house, educated your kids and life was good. Now in the more precarious gig economy, loans for housing or cars will be difficult to come by, and home prices in east coast Australia remain stubbornly high. At the same time, conservative governments are focused on austerity and are seeking to cut costs on welfare payments and to make welfare more difficult to obtain. In Australia, under the conservative government, this seems to be following the trajectory of the UK Conservative policy, and it will likely have the similar consequences as the rules get increasingly tight.

This lack of permanency in the job market will likely drive a growth in populist politics, empowering people to vote against the major parties in Australia and overseas. This phenomenon will be similar to what happened in the UK with Brexit and US with Trump, and it means that we face continued growth in minor parties in the Senate and possibly even in the House.

It is fast approaching the time for nations to consider new policy options, such as the idea of a universal basic income. But I do not think that conservative governments will support such a notion. And therefore we are in for interesting times as the old social compact disintegrates and the world of work changes forever.

Sometimes I feel like being a revolutionary cat. View all posts by Kate Carruthers